National Popular Vote, the group pushing the NPV compact, is focusing in 2021 on Virginia and eight other states: Arizona, Arkansas, Maine, Michigan, Minnesota, Nevada, North Carolina and Oklahoma.  These are their targeted States that have full Republican Legislatures, where NPV sees enough weakness that they believe these Republicans will enact the NPVIC scheme.

They are targeting "Purple" States as well.

The initiative has made progress in those states by passing at least one legislative chamber, but didn’t clear the finish line, spokesman Patrick Rosenstiel said.
​
They have a combined total of 88 electoral votes, enough to surpass 270.
“We’ll focus on any states that offer a credible chance of enactment between now and the 2024 presidential election,” Rosenstiel said. 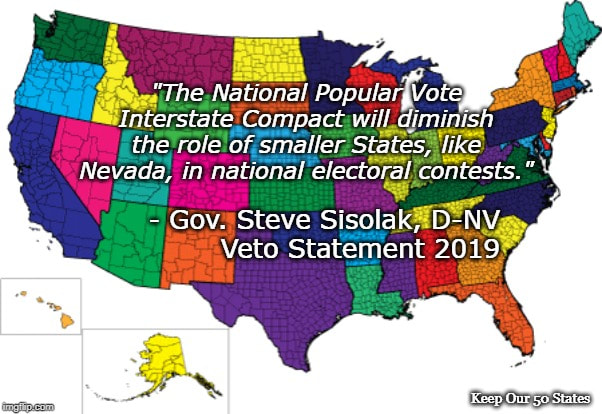 ​“Once effective, the National Popular Vote Interstate Compact could diminish the role of smaller states like Nevada in national electoral contests and force Nevada’s electors to side with whoever wins the nationwide popular vote, rather than the candidate Nevadans choose.

“I recognize that many of my fellow Nevadans may disagree on this point and I appreciate the legislature’s thoughtful consideration of this important issue. As Nevada’s governor, I am obligated to make such decisions according to my own conscience.

​"In cases like this, where Nevada’s interests could diverge from the interests of large states, I will always stand up for Nevada.” 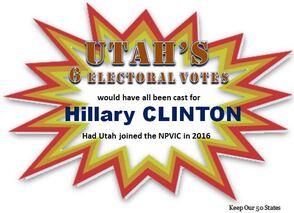 SALT LAKE CITY, 11-18-2017 - Should Utah's electoral votes for president go to winner of the national popular vote?  By Lisa Riley Roche, Deseret NEWS.  Utah's 6 Electoral Votes would have gone to Hillary Clinton in 2016, which hasn't voted for a Democrat since 1964.